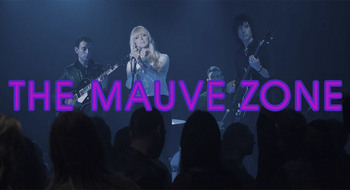 Twin Peaks fans, @Vicksvapor77 and I are proud to announce the opening of http://www.themauvezone.com/

Twin Peaks is a really special show that pushed the boundaries of television to its limits when it premiered on April 8, 1990. Unlike shows in today's TV landscape, Twin Peaks built its audience in a world without social media where the Web didn't even exist. As a result, a bulk of the promotional material for the show remains scattered across old magazines, film slides, and VHS tapes which have slowly been lost to the passage of time.

@Vicksvapor77 and I have spent the last year cataloging and preserving promotional material that was released for the original ABC series, the feature film Fire Walk with Me, and the 2017 Limited Event Series revival on Showtime. We have assembled a comprehensive library of Twin Peaks media at TheMauveZone.com complete with rare TV promos, cast interviews, photoshoots, and production stills.

We want to thank all the Twin Peaks fans that have kept the dream alive for over 25 years. This site wouldn't have been possible if it wasn't for all of you pouring so much energy and love into Twin Peaks over the years. Feel free to check out our galleries and enjoy the site!
"Whatever happened, happened." -Daniel Faraday
Top

I really, really love it! It's amazing to see the trailers again, etc, since it really brings back the sense of anticipation before the series aired. I had a very vivid flashback to the long wait for footage, remembering how grumpy everyone was getting with the lack of footage as the air date moved closer.

Better still, there is so much stuff I've never even seen before. Mostly n the behind the scenes section, but also the really cool 15 second teasers.

Great job on this!
Top

This is absolutely fantastic! Great job guys!
This is - excuse me - a damn fine cup of coffee.
Top

Amazing stuff, guys! I’ve never understood why these types of gallery-themed fan sites seem to have gone out of vogue. I love these types of resources, and you guys have really gone above and beyond. I can’t wait to find time to go through everything.
My Twin Peaks timeline.
Top

Thank You for doing this for all of us fans, I look forward to really going into all of it. It seems amazing and another great thing to add to our fandom.
Top

Thanks a lot both of y'all !! Truly nostalgic to watch all those trailers and promos again!
Top

This is so awesome! Thanks for putting it together!
Top

I've been looking for that 1hr reel of raw season 2 footage for forever, thanks so much!

One piece of advice: generally on say, private torrent trackers, a level of discretion is sometimes taken to avoid legal trouble by simply omitting anything commercially available. One of those sites for instance allows Between Two Worlds to be posted, because the bluray set that had the extra disc that was on is OOP, replaced with the one disc shorter version you can still buy new today. Basically, you might want to err on the side of caution and include things that are from OOP sources only, or in the case of magazines, old print issues but not current ones. Some of the clips on the BTS page for season 3 for instance are actually just small segments (I might be wrong...) in that long documentary on the S3 bluray.

Do you have any plans to post material like the official TP gazette newspaper?
Recipe not my own. In a coffee cup. 3 TBS flour, 2 TBS sugar, 1.5 TBS cocoa powder, .25 TSP baking powder, pinch of salt. 3 TBS milk, 1.5 TBS vegetable oil, 1 TBS peanut butter. Add and mix each set. Microwave 1 minute 10 seconds. The cup will be hot.
Top

Thanks for the advice regarding OOP content! Our mail goal is to preserve lost content and not necessarily make everything available that is already on the official Blu-Ray Discs and DVDs. Outside of some trailers and deleted scenes (hopefully this isn't an issue), we aren't hosting anything else from the official discs. The videos in our "Behind the Scenes" gallery are just snippets of some of the features that I snagged off YouTube.

And I'm afraid I don't have the Twin Peaks Gazette newspapers, but if anyone has them I could certainly add them to the site.
"Whatever happened, happened." -Daniel Faraday
Top

Ashok wrote:Hey AXX°N N.,
And I'm afraid I don't have the Twin Peaks Gazette newspapers, but if anyone has them I could certainly add them to the site.

I have them actually! I don't have a scanner so the quality would only be as good as I could get my camera to behave. They're such an obscure part of the franchise, and until now there hasn't really been a fitting place to finally see them hosted.

Come a week and no one with better tech speaks up, I can try and get them shot for you.

What’s the deal with the “Cooper’s Bathroom” snippet in the deleted scenes section? It appears to be identical footage to that in Episode 29, but it is time stamped 3/28/89 (which is the date that the scene takes place in-universe). I’m intrigued to know where this came from!

Also, FYI: None of the links in the S1&2 Promotional video section work. When I click on any of the videos, it says nothing was found at the location.
My Twin Peaks timeline.
Top

Kyle is actually wearing a bird’s nest on his head in the Pilot photoshoot. Hoo boy, is that an awful wig.

As an added bonus, we get probably the only shot ever of Dale puffing away on a cigarette!

Thanks for the info on the broken links. The S1&2 Promotional videos section should be working now. Let me know if you find any other issues with the new site. Regarding the “Cooper’s Bathroom” snippet, I had found that on Pieter Dom's Welcome to Twin Peaks website. Here's his post on the video but there doesn't seem to be any additional information about it. https://twitter.com/ThatsOurWaldo/statu ... 1695776769
"Whatever happened, happened." -Daniel Faraday
Top

Thanks for the info on the broken links. The S1&2 Promotional videos section should be working now. Let me know if you find any other issues with the new site. Regarding the “Cooper’s Bathroom” snippet, I had found that on Pieter Dom's Welcome to Twin Peaks website. Here's his post on the video but there doesn't seem to be any additional information about it. https://twitter.com/ThatsOurWaldo/statu ... 1695776769

Way back when, Jerry referenced a few deleted scenes that he knows production stills exist of (e.g., Hank shoving Tojamura’s face into a plate of mashed potatoes in E12): viewtopic.php?f=3&t=2168&hilit=Tojamura&start=60#p28973 I wonder if he or anyone else has any leads on chasing these stills down? There is of course also the famed Tim & Tom’s Taxi-dermy shoot.

Jerry also posted some shots from an E3 deleted scene that apparently was supposed to make the Entire Mystery Blu Ray but did not: http://twinpeaksarchive.blogspot.com/20 ... d.html?m=1 I don’t know where he gets this stuff!
My Twin Peaks timeline.
Top
Post Reply
32 posts

Users browsing this forum: No registered users and 1 guest