I like how the headdress on the taller tiki resembles the angular pattern on Cooper's tie in the red room from Episode 2.
Top

Several Beer (Leinenkugel is the official beer of the Roadhouse) entries at Twin Peaks Props!

Jerry this is a great prop! Thank you for sharing all these treasures!

I figure this is probably the best place to quickly introduce myself since this particular forum thread is what encouraged me to register and post here.

I never saw 'Twin Peaks' during its original run, mainly because I am not a TV soap opera kind of guy and that's how I remember it being promoted. Back then I was only slightly aware of who David Lynch was... but only because I was quite familiar with 'Dune' -- being the Sci-Fi fanatic that I am. Fast forward to 1993. A friend and co-worker of mine, Bob (ironic, hey?), happened to mention 'Twin Peaks' during a conversation at work and proceeded to intrigue me with some of the odd bits and pieces he was sharing. Owl cave? The Bookhouse Boys? The Black Lodge? A dancing dwarf? Within what seemed like mere weeks of each other, my then girlfriend encourages me to get cable TV hooked up at the house, and Bob informs me that Bravo is re-airing the entire Twin Peaks series and that I really should watch it. Needless to say, I was hooked. Thanks to Bob, I was also made aware of Blue Velvet which I saw for the very first time later that same year. Epic stuff.

So enough about me.

Let me start again by saying that these past 10 pages have been filled with some of the coolest prop photos from Twin Peaks I have ever seen. Well, perhaps second only to Jerry's web site http://www.twinpeaksprops.blogspot.com itself. Great stuff all around! There are a few props here that I would love to discuss, but I will leave that for another time... I'm just trying to get my feet wet here.

Although I can only dream of having all of the original props from the show that I like, it's awesome that a number of 'off-the-shelf' items have been identified so that we may try to locate them and relive the 'Twin Peaks' experience vicariously through them. Speaking of which, thanks to Jerry's blog, last year I was able to identify and obtain Cooper's Dial Master... 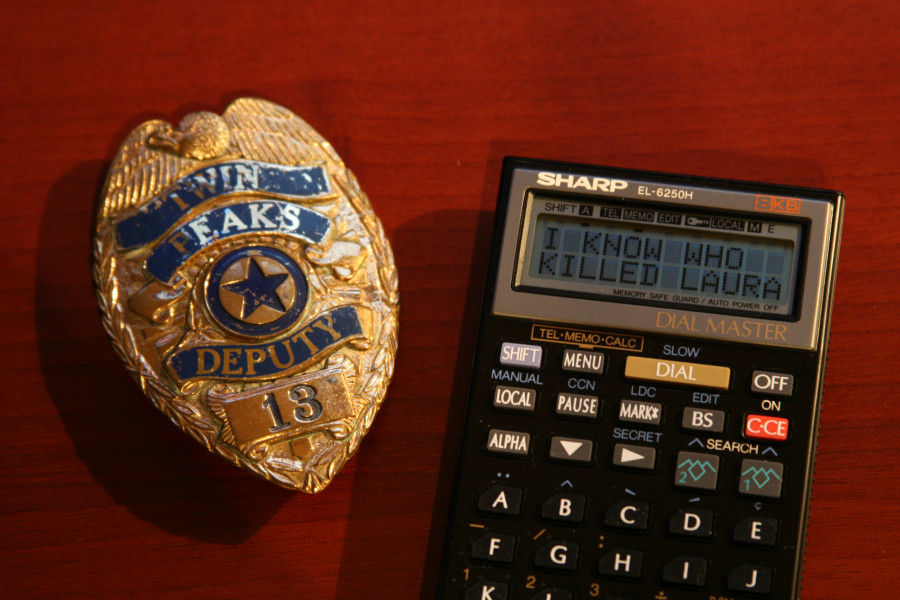 I've got a few more props to share, but they'll have to wait. It's late here, and I've got dreams to deal with.

Ripstick - thanks for the kind words and welcome! I'd love to know more about that badge! Is that the one that was on eBay a few years ago?

Holy cow!! I just noticed those Owl Cave symbols on the key pad! How was that done??

Hi Jerry, and thanks!

Ah yes... the badge. Interesting story about that.

You see, back in 2000 and 2001 I had been saving up to purchase and import a 1978 Ford Falcon XC from Australia. Then the WTC gets hit, we're at war, and the US dollar takes a nosedive. Instead of an exchange rate of .52 cents to an Australian dollar, it jumps to .76 cents on the AUD. That dream car of mine had been so close I could practically smell the high octane petrol, yet suddenly and without warning it shot right out of reach. So, with $5000 burning a good sized hole in my pocket I decided to flip through one of Bruce's famous "Twin Peaks Collectables" catalog and...

...er, hold on a second. That's not entirely correct. Let's take another step back, shall we?

I first remember seeing Cooper's Deputy badge in the very first issue of Wrapped in Plastic where they had reprinted photos of several original props and rare crew items that Bruce had submitted to them, and apparently still had in his possession at the time: 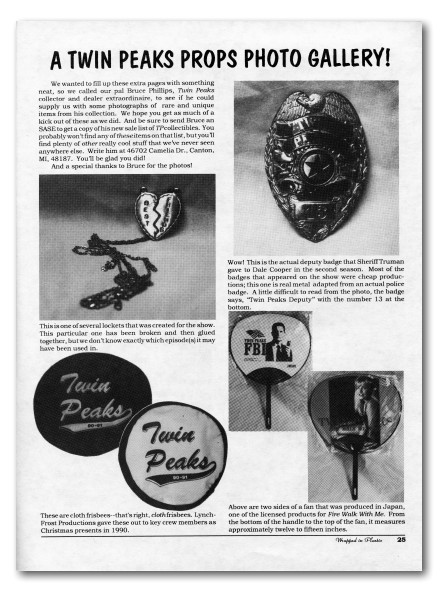 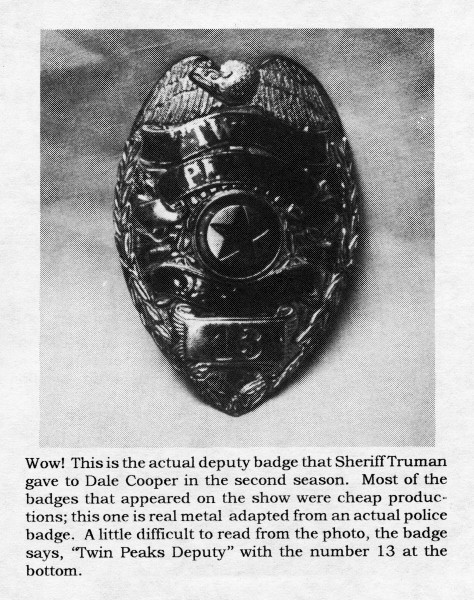 That was 1993. Later Bruce offered the badge up for sale in his "Twin Peaks Collectables" catalog in either 1998 or 1999. Unfortunately I was only 'beginning' to get into prop collecting, and this badge (among several other very nice props and crew items) were priced well out of my financial reach.

Now then, back to the original Australian Ford Falcon story.

Fast forward to 2002. With the exchange rate between the USD and the AUD continuing to worsen, I chose to stop holding out for the Falcon any longer, and decided to put the money into building an addition onto my garage instead. By this time my Twin Peaks memorabilia collecting had been kicked into high gear, and I had been scouring eBay for those rare and hard to find items on a daily basis. As luck would have it, an auction popped up one day offering this very same badge. Not only did Bruce still have Cooper's Deputy badge, but he had Truman's Sheriff badge as well.

In the end, I was the only bidder on Cooper's Deputy badge...

Great story! I've checked eBay at least once a week since 1998. Someone told me that that badge had sold on eBay and wouldn't you know it - it was while I was on vacation

Still, cool for you - it's a great prop.

I know the crew member who has the original Dial Master. He won't sell it to me. It's slightly busted from when he dropped it of his motorcycle and half of the display is black.

I'd love to put a picture of your Badge prop on my site. Do you have a solo picture of it?

Very interested in what other props you have!
Top

Yep, timing is everything. I missed out on Jake Cutter's original hero flight jacket from 'Tales of the Gold Monkey' back in 2001 because I was in California on vacation with family. Being the big Gold Monkey fan that I was and still am, that one continues to sting a little.

I'll see what I can do in regards to a solo photo of the badge for your site. I for one can tell you what a pain it was taking that photo, dealing with all of the light reflections and trying to keep as much of it in focus as possible. That was a loooong photo session, longer than it should have been. I've got a couple other 'group' shots that this badge is part of, but I'll see if there are any I can cleanly crop the badge out of.

That's actually pretty cool that you know who still has the original Dial Master. Bummer about the damage, but we cannot expect everyone to handle these rare props with kid gloves as we all probably do.

I figured the giant did that for Dale the last time he was in the Black Lodge so that he had a way of communicating with him and the dwarf in case he got into trouble.

Well actually, anyone familiar with this particular item knows what those keys really look like, and how they already somewhat resemble the Owl Cave symbol. That said, I took it upon myself to do a little post-production photoshop magic.

New prop identification from the Pilot!!

LOL. You never stop to amaze me Jerry.

When I watched some scenes few days ago i noticed lovely doll by the cache machine in the Annie and Cooper dance scene - just when we first see Annie waiting for the Cooper. After over 20 years I still can discover something unnoticed. Just amazing!
http://www.lynchland.eu (Polish Site)
Top

LOL. You never stop to amaze me Jerry.

When I watched some scenes few days ago i noticed lovely doll by the cache machine in the Annie and Cooper dance scene - just when we first see Annie waiting for the Cooper. After over 20 years I still can discover something unnoticed. Just amazing!

Thanks qbin! Wow, I don't recall seeing that. I know what you mean though, every time I watch the series I see 3 or 4 things that I've never seen before!
Top

That's awesome Jerry!! Is it yours?

What's the story with that Johnny scene again? Was it old footage from a scene filmed for a previous episode?
"I can see half my life's history in your face... And I'm not sure that I want to."
http://twinpeakssoundtrackdesign.blogspot.com/
Top

Ross wrote:That's awesome Jerry!! Is it yours?

What's the story with that Johnny scene again? Was it old footage from a scene filmed for a previous episode?

Ross, it's not mine, but I have it in my possession right now. My arrows arrive soon

Good question about the footage. Could have been from that deleted season 1 (?) scene.
Top

Ross wrote:That's awesome Jerry!! Is it yours?

What's the story with that Johnny scene again? Was it old footage from a scene filmed for a previous episode?

Ross, it's not mine, but I have it in my possession right now. My arrows arrive soon

Good question about the footage. Could have been from that deleted season 1 (?) scene.

Very cool prop, that's for sure. And that's what I was thinking about the footage- that they just used something they shot from that earlier scene. I think they did that a few times. Wasn't the footage of James riding out of TP at the start of episode 18 actually filmed during season 1, or the pilot?
"I can see half my life's history in your face... And I'm not sure that I want to."
http://twinpeakssoundtrackdesign.blogspot.com/
Top
Post Reply
229 posts

Users browsing this forum: No registered users and 3 guests