Posting of spoilers are allowed as long as you indicate (Spoilers) in the topic name and use the Spoiler Tag.
Post Reply
79 posts

I'm wondering how people read the ring in Fire Walk With Me. For me, as I've posted elsewhere, it seems to signify knowledge. Every time it appears in the film, a character has learned, discovered, or suspects something new: Teresa realizing Leland might be Laura's father, the one-armed man waving it in traffic as he confronts Leland and shouts at Laura "it's him," Laura remembering Teresa's ring before growling, "Who are you really?", and in the end her discovery of angelic power before placing the ring on her finger herself. Even in the Missing Pieces the nurse notices it after hearing Annie report that Dale is in the Lodge - same as when Laura herself discovers it in her hand for the first time. No exceptions to this rule come to mind. This also connects it to Cooper's ring in the series which is taken from him by the giant and only returned when he remembers Laura's killer.

Of course the ring is also related to the wearer's doom/death (though Laura placing it on her finger before her redemptive ending indicates it dooms the body but NOT the soul). And it seems to indicate some power of the Lodge over the wearer (the left arm goes numb - the same arm Mike cut off). But as everything in Lynch's world has a psychodramatic resonance alongside and often above a clearly narrative one it's the thematic importance that interests me. What does it mean for the characters and the themes of the film? What is its significance?
Top

"Conventional Hollywood heroes tend to be phallic figures, configured in conformity with dominant Freudian psychology that implicates the bearer of the phallus as the one who can attain knowledge and power. Theroretically, this formulation excludes both women and women's ways of knowking as marginal in importance both in narrative and in life. Certainly, there are exceptions to this dominant tendency. There are, now and again, strong women "as good as men" in mass media. These women, however, are phallic in concept too, depicted in ways that make phallic power a matter not of the biological penis but an abstract sign of the force necessary to create and organize. They are atypically willful and controlling; they can learn to fight (with the symbolic phallic weapon) [Inland Empire/Screwdriver] or write (with the symbolic phallic writing implement) so as to make them resemble the approved hero. These women are not associated with anything feminine like receptivity. With regard to both the male and female "hero," Lynch sees an imbalanced priority on agreession and control in knowing - or seeing. By contrast, in Twin Peaks the dominance of phallic power is represented in BOB, the annihilator of meaning. Receptivity is a value in this context, gaining a real place for women and a transformed relationship between the seeker and the feminine. Reality in Twin Peaks is dependent on heterogeneous balancing of phallic force with feminine, labial receptvitiy."

Closeup on Donna's lips reading the diary and Cooper's gaze. Bob can be seen as an expression of a latency state ("il existe à l'état latent." download/file.php?id=2228) coupled with notions of infantile amnesia: the repression of the child's earliest traumatic, overly sexual or evil memories.

What an image!
Top

Re-oriented the story towards an emphasis on Laura's trauma and not just her place in the Lodge mythology. Especially relevant: the inclusion of the angels & the ring's positive function

On a separate note (aside from the ring)

The screen-caps remind me of something I've been thinking about with Ronette and Laura in the train car. Obviously I've noted a few times that I think Ronette and Donna work as doppelgangers in the narrative - what's more, they are perfect visual representations of Laura's two sides, the good and the bad. In the train car, Ronette's prayer is very specifically addressed to, as I recall, "Father." It makes me think a bit of a medieval painting in which a figure will be represented side-by-side with itself in an earlier/different incarnation (like the one in which in the monk is traveling across a desert - it's like a latter-day comic panel but without any delineation between the different "panels"). Such images represent different times spatially - in FWWM, it's the different aspects of Laura's psyche which are represented spatially, particularly in the Pink Room where her own swing toward good and bad is shown by the corruption of Donna and the arrival of Ronette. I think, in this sense, the debates about "is it all in Laura's head?" vs. "is the supernatural real and separate" miss the point. FWWM is ALL allegory, same as Lost Highway or Mulholland Drive. While there may be dreams within the film, the whole thing functions like a dream, or more accurately a psychodrama. Reminds me of Pauline Kael's review of 8 1/2, something to the effect that when people asked her which parts she thought were fantasies, she responded, the whole thing's a fantasy!

Another thing, though, from your screen-caps...

I always thought she said "Look at me," not "Don't look at me." The former line makes more sense to me than the latter is she is requesting divine intervention.
Top

We can also draw a parallel between Audrey's ring and the perfume counter at Horne's as an entryway to One-Eyes Jack's ("J") with the space above the convenience store (Judy's?) being an entryway to the Red Room where the Owl Cave ring is first seen. download/file.php?id=2205.
Last edited by Fernanda on Sun Apr 19, 2015 5:41 am, edited 7 times in total.
Top

Fernanda wrote:In The Missing Pieces Doc Hayward's secret message telling Laura about meeting the angel that is meant to help her (one out of two, Laura's after she dies and Ronette's while still living) is immediately followed by Leland's call; notice the use of the music in that scene.

After watching the "What Does She See? What Does She Hear?" video it sounded to me a lot that particular mix of Laura Palmer's Theme. Considering the scene was cut/mixed/scored in 2014 I wonder if it was...
Top

The inverted owl symbol could be evocative of a corncob. I think in the film the ring is always presented in the same way as after the petroglyph is rotated and not as it was originally found
Last edited by Fernanda on Sun Apr 19, 2015 5:43 am, edited 2 times in total.
Top

Fernanda wrote:I find the inverted owl symbol to be evocative of a corncob. In the film the ring is always presented in the same way as after the petroglyph is rotated and not as it was originally found.

Windham Earle inverts the symbol to match the marking on the wall, right? 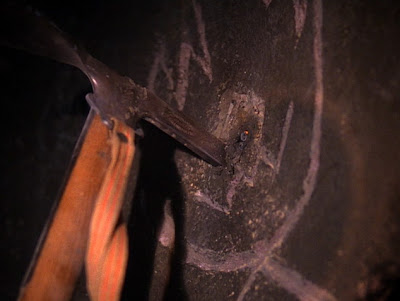 It's also inverted on the map: 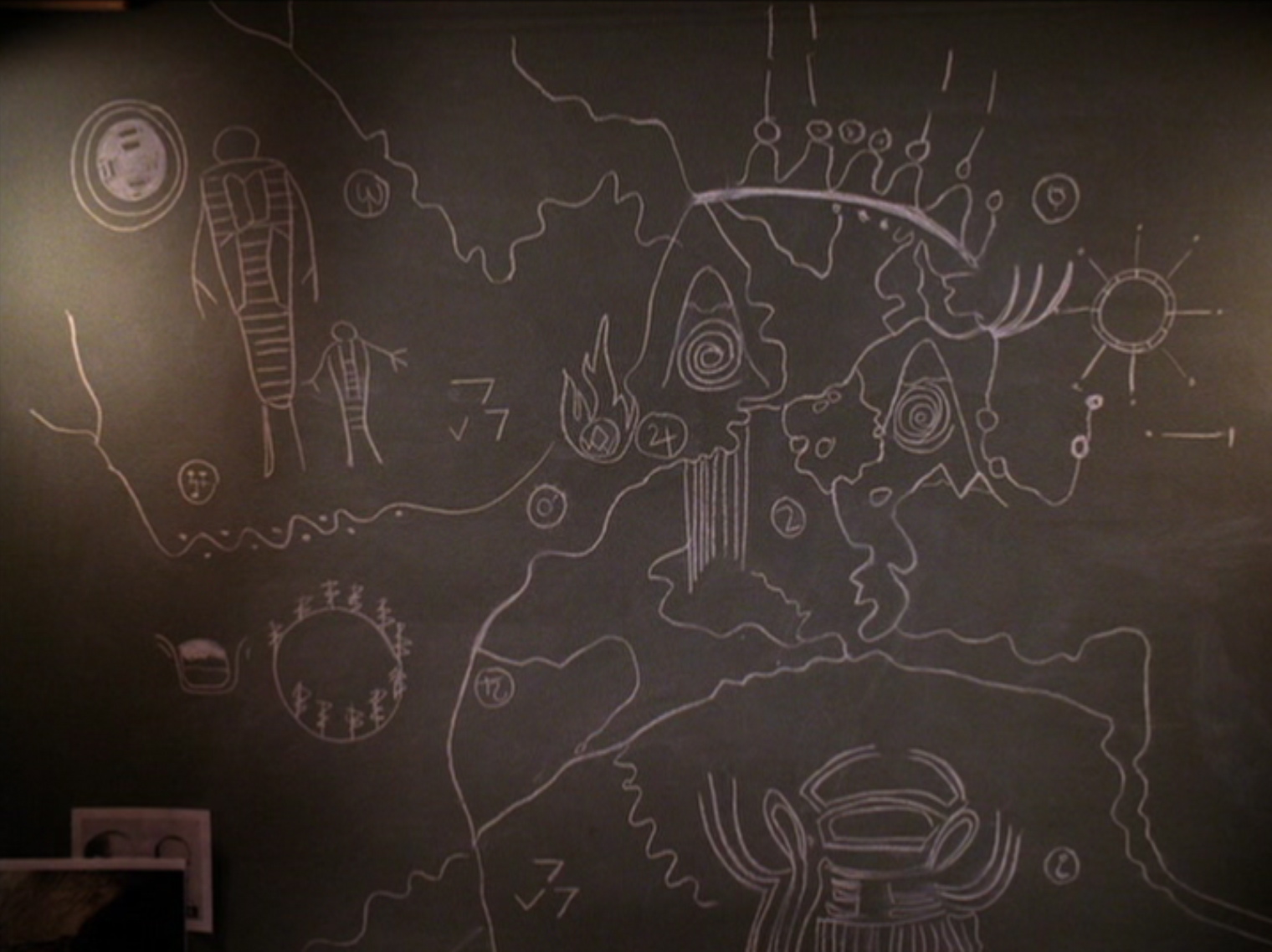 I don't remember if the symbol on the show is always shown without the serif that looks like a head. Just going by memory, it doesn't ever have that serif on the show. I say it looks like a head, but it could be a tail, though that would make the wing position very odd. One possibility is that we're meant to see this owl as diving down from above, going after prey below, which could be a good reason to add the serif head (if that's what it is) in order to stress this symbolism.

I have something to add to this discussion, but I've been putting it off because I need to make a little graphic for it to make sense. Maybe I'll get to it soon.
Top

One possibility is that we're meant to see this owl as diving down from above, going after prey below

The shot of TMFAP is a tracking POV diving down and Cooper and TMFAP are seen from a very high angle in the two 'is it future or is it past' scenes, but owls are barely mentioned by name in the script let alone in the finished film, though there are shots of an owl and a fire explosion in episode 26 I believe. What matters is that the POV shot is Laura's.

Jasper wrote:I don't remember if the symbol on the show is always shown without the serif that looks like a head. Just going by memory, it doesn't ever have that serif on the show. I say it looks like a head, but it could be a tail, though that would make the wing position very odd. One possibility is that we're meant to see this owl as diving down from above, going after prey below, which could be a good reason to add the serif head (if that's what it is) in order to stress this symbolism.

I have something to add to this discussion, but I've been putting it off because I need to make a little graphic for it to make sense. Maybe I'll get to it soon.

I wonder who actually came up with the Owl Cave symbol? Is anyone on record claiming or giving credit? We first see it in episode 25 as I recall in the diner scene with (hmm) Gordon Cole. (EDIT: Only the two separate symbols are introduced in the previous episode, right?) Though for whatever reason it seems more like a Frost contribution to me as I get the sense he's more into esoteric lore than Lynch. Or at least more vocal about it.
Top

I think Fernanda's idea that the symbol evokes corn is spot on. There's something very close to Mayan/native American corn worship going on with the whole garmonbozia thing, although turned on its head.Iit's like an evil version of the Popul Vuh.
Top
Post Reply
79 posts