A good read. Thanks Ashok.
When Jupiter and Saturn meet...
Top

‘It was a gnarly ride’: Australian Eamon Farren on his surprise Twin Peaks role
Top 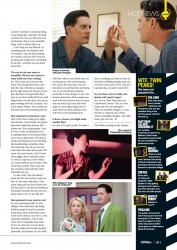 Really enjoyed reading this. Thanks for posting it.

Interesting that Ray says here he only found out Leland was the killer before shooting the scene in episode 14. I've never heard that before. The version I heard years ago claimed that meeting that was at the start of Season 2.

THR's Tim Goodman (he of the snide thinkpiece claiming Legion had unseated TP several months ago) is still salty:

Q: From Ryan Acheson via Twitter (and trust me, there were similar emails on this topic): "Looks like you underestimated David Lynch's ability to be creative and frighteningly weird. Gotta light?"

A: Ah, yes, a reference to Ep. 8 of Twin Peaks and, more directly to this critic's notebook I wrote about how FX's Legion could have stolen the thunder of Twin Peaks because lots of shows learned how to be weird in the 26-year absence of Twin Peaks, and Legion, of all shows, was particularly deft at it. But yes, Ryan, I did underestimate Lynch's ability to bring the weirdness — by an order of magnitude. That said, not all of what Lynch is putting on the screen is creepy and creative at the same time. Sometimes it's just, well, weirdness as affectation. Or eye-rolling (the use of a little person with what appears to be an awl, going on a murderous rampage), etc. I'm finding Lynch's many indulgences trying at this point but will keep watching to the end, even though it has rather aggressively been a show I find a chore to watch.

Sad! He's also begun to bitch extensively on his Twitter and 'actively loathed' it after the first four eps.

Les Cahiers du Cinéma - july-august 2017.
30 pages in this famous french movie magazine, including 6 articles and a review of episodes S03E01 to E08 :

Wow - I really want to get this! Any idea how to buy it outside of France?
Top

The Part 9 scene was his first scene (as well as Bell's). It was shot in a real jail, and was done in two takes. He had no clue what Parts his scenes would end up in and claims he has no idea if we'll see Hastings again (take that as you will).

EDIT: Forgot to add, any mention of Mark being on set makes me so happy!
My Twin Peaks timeline.
Top

Thanks for sharing- it's a a brilliant interview. I'm really enjoying the insight we're getting into the lives of jobbing actors during this run. He has been a real standout for me in the new series, and the crazy circumstances surrounding the shoot only make this more impressive.
Top

Great interview. Matthew has been amazing so far, I hope we'll see more of him.
This is - excuse me - a damn fine cup of coffee.
Top

That was Chrysta's first day, ever? I feel awful for judging her introduction so harshly she was on point for that scene.
Too Old to Die Young > TP S03
Top

Interview with Dana Ashbrook on Vulture