Posting of spoilers are allowed as long as you indicate (Spoilers) in the topic name and use the Spoiler Tag.
Post Reply
89 posts

Of course we'd have to ask Lynch directly for this, but I have the strong feeling that the "Gold represents the highest quality" quote is an endorsement of the "gold box" name for this collection, setting it apart from the previously available edition and stating what makes the "gold" one special, but it was not a justification for that hideous artwork that Lynch may not even have seen by the time he said this.

The fact that many people here are reconsidering their judgement about the artwork in the light of the final content only speaks for them: it proves they are not people to judge a book by its cover, and can even look at the fugly cover with more forgiving eyes because they like the book's content so much.

But this doesn't in any way change the fact that the cover itself is fugly. It is a disgrace to the whole graphic design world, and it's the greatest irony that, out of all the hundreds different artworks made for the series (the US, UK, French (...) VHS covers, the laserdiscs covers, the previous DVD covers, the fan covers posted in the original gold box topic) the set with the best content, the most comprehensive, interesting and respectful to the series and the fans, would end up with the worst, most ridiculous, amateurish, repulsive artwork which violates in every way the atmosphere and graphic codes used in the series/credit, which have an unforgettable visual identity.
Top

I'm still delighted, cover or no cover. I do agree, however, that the cover is shit. I'm delighted with the Special Features - more than we could ever have hoped for! It seems like finally they LISTENED TO US FANS.

Of course, there's bound to be stuff we will be disappointed with, and there's still stuff we're disappointed they left out. But would we ever really be 100% happy with anything? Maybe we'll always be less than satisfied with Peaks features/releases because it's so hard to let the show go, we still want it to be on the air, whether we admit it or not .... That's how I feel, anyhow.

Remember, that initially it looked like the Gold Box was just going to be the as-is Seasons 1 and 2 with the only bonus being the pilot. Considering what we have been promised now ... that's a Giant (!) leap.
Top

It's an ugly cover but it's just a DVD at the end of the day. The Complete Mystery may not live up to its potential but people have worked hard on it. I don't think it's a case of the fans being mercilessly fleeced by vile capitalists... We have every episode of Twin Peaks on DVD, and both versions of the pilot.

I've started to feel sorry for the people who've put the set together. The gold cover's loathsome but the vitriol's getting out of hand! It's much ado about nothing.
Top

It's the contents that interest me. The fact is that I would have bought this just for the remastered pilot, and with all the extras - just the thought of a pilot documentary makes me all giddy with excitement - it's a no-brainer.

Besides, the cover is easily replaceable - as opposed to the contents. I'm thinking 5 standard DVD double covers with Charles' or others' custom made covers will be a good replacement. Maybe with a Twin Peaks written on the combined spines of the 5, like the old VHS package. 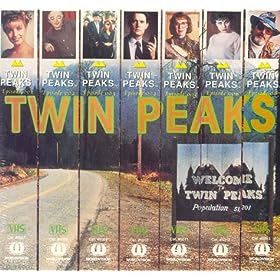 In fact, I might try this myself.
"Who's the towhead? Those drugs are LEGAL!"
Top

Would very much like to have more than 4 deleted scenes included (esp as the only one I've seen is Lucy & Andy buying donuts), but the inclusion of the documentaries and BOTH versions of the pilot has got me very excited. I was going to skip this set, but I'll definitely be buying it now!
Top

Those are nice. What is that on the left? A ring?
"Who's the towhead? Those drugs are LEGAL!"
Top

Hahaha, that was actually my first thought, but I considered it to be too fanboyish and far-fetched.

"Who's the towhead? Those drugs are LEGAL!"
Top

I agree that the gold cover doesn't seem representative of the series. I'd expect to see this type of presentation on a James Bond box set, not a Twin Peaks one. I also preferred the original, unconfirmed box set title, "The Complete Mystery."

Oh well...It still sounds like this set is going to be a quality release overall (lots of extra features and good audio/video). I'm definitely planning on purchasing it.
Top

Now up for pre-order at Amazon.com

Jerry Horne wrote:Now up for pre-order at Amazon.com


Oh yes yes yes YES! Finally! I'm delighted. What a brilliant price. I ordered two! Would like to keep one sealed. Wish I had done that with original US Season 1 edition.

What to say that hasn't already been said? The extras look out-standing, and that should really be enough to get over the cover.

The new interviews and documentaries would be a chief highlight. The fact they've split it into seperate Season One and Two making ofs is interesting... here's hoping the cast and crew let loose on why exactly certain plots in the second season went downhill.

Here's a pic of the discs themselves, courtesy of what appears to be their TV Guide site --

...and finally, a cool Blacklodge link from there --

Got to love how the Japanese know a good thing when they see it...

Users browsing this forum: No registered users and 23 guests