He’s been remaking Vertigo with Peaks since practically Day One of the series. Maddy Ferguson being the obvious hybrid of Stewart and Novak. But even more so Lynch became Ferguson by falling in love with the Laura character in general.
God, I love this music. Isn't it too dreamy?
Top

They found this on the world wide web. I started a little investigation about Cooper's mysterious FBI-pin that turned upside down. When did that happen and why? The picture shows that when Cooper/Richard enters Judy's his pin was still A-okay. As soon as he sits down at a booth this pin turns upside down. Weird hey?
Talking about weird. Did Kristi, the waitress, pour any coffee in his cup at all? Did Cooper collect 2 or 3 guns from those cowboys? Cowboys? In Odessa? Well, behind the counter near the boiling oil, he's got 3 guns for sure. Why didn't he unload them before dropping them in the hot burning oil?
Further down the lane, at the front door of Carrie Page. Why didn't he give it a ring at the door, albeit knock on the door instead? Why was Carrie's first question "Did you find him?" Did she mean the dead guy in her living room? All in all why didn't Cooper react in accordance to his previous omniscience and perfect touch in 100% sync with space and time? He truly existed "in the moment" from the time he "woke up from his coma."

Of course these are all rhetorical questions, because my answer is that dead Cooper found the impossible entrance, provided by Jeffries, to persist in a world being both "dead and alive," to persist in a world where you can change the past, which disrupts the order of the fabrics of space-time; the firm logic of cause and effect are lost. 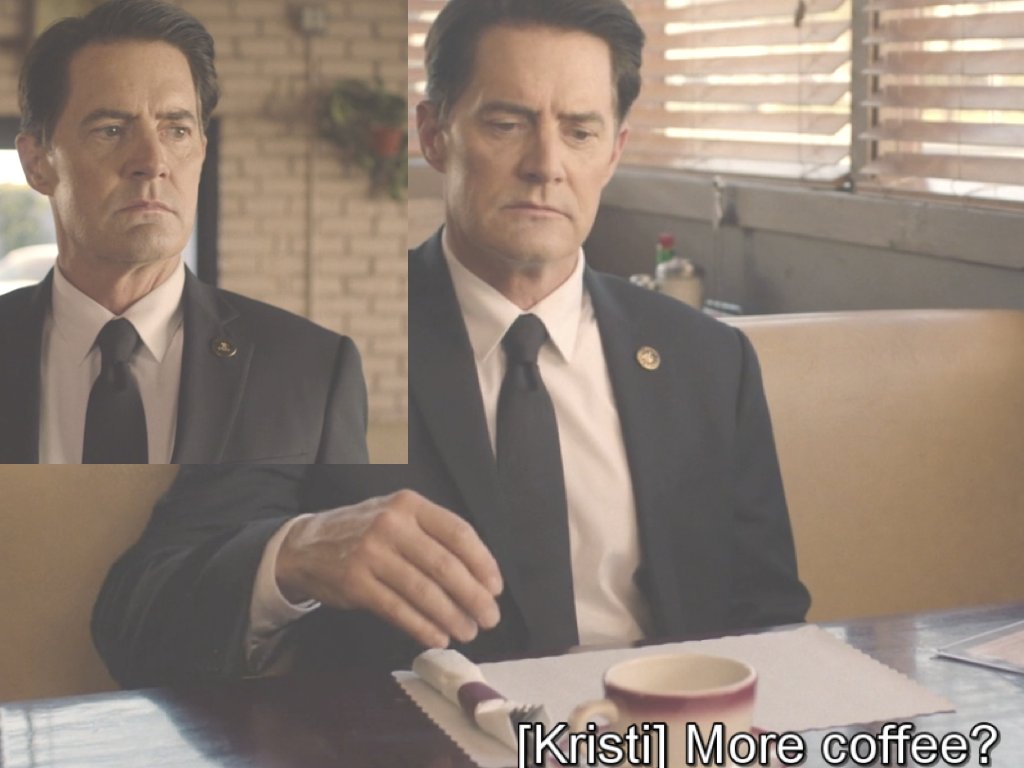 thanks xavi, keep it coming

Xavi wrote: Further down the lane, at the front door of Carrie Page. Why didn't he give it a ring at the door, albeit knock on the door instead? Why was Carrie's first question "Did you find him?" Did she mean the dead guy in her living room? All in all why didn't Cooper react in accordance to his previous omniscience and perfect touch in 100% sync with space and time? He truly existed "in the moment" from the time he "woke up from his coma."


Cooper going to Carrie's door almost feel like a alternate follow up to Audrey choking Charlie. Audrey is still looking for Billy ('Did you find him?' - Carrie) then there's the dead guy on Carrie's couch. Maybe it's a Sunset Boulevard reference to when Norma killed Joe. Carrie gets on her coat to leave, the phone is ringing as Carrie leaves (Audrey is 'tired of waiting for the phone to ring')
Top

What is the deal with Tommy’s stomach (assuming that is Tommy)?! He seems to have some chestburster action going on!

Is that black creamed corn, a Bob-orb, or something else entirely? Not to mention that his flannel shirt has a distinctly Woodsman-esque quality to it. Whatever this is, it lends a whole new layer to my understanding of Carrie Page’s existence. Looks like poor Laura can’t avoid contact with the otherworldly, regardless of her identity or what universe she’s in. I’m going to need some time to unpack this.

Also worth noting that there’s a half-eaten TV dinner on Carrie’s windowsill, which is about the most beautifully white trash symbol I could imagine.

The Leland scene is shot from an entirely different angle when compared to Part 2. I’m sure a lot of people know this, but I didn’t realize until I did a side-by-side comparison.

On the other hand, Laura whispering to Cooper is the same take as Part 2, but the edit is different. Whereas Part 2 does the lean-in in wide, this cut lets us see the previously-unseen beginning of the close two-shot, with Laura leaning in. Oddly, this version shows Cooper opening his mouth twice. He says “huh” at a different point than in the Part 2 cut. Here, he says “huh” the first time he opens his mouth (not seen in Part 2), whereas his second open-mouthed moment (the “huh” in Part 2) is mute. Obviously an intentional choice, and a particularly perplexing one, even for DKL. (For those wondering: the end credits of Part 18 appear to be a loop, with both “huh” moments repeated twice — it’s a bit more complicated than that, but I won’t get into it unless anyone is REALLY curious, because this is already feeling ridiculously pedantic.)

Does anyone know where they shot Glastonbury Grove? Was it the original location?

Stuff that irrationally annoys me: Cooper doesn’t take the second cowboy’s gun (even though he was clearly reaching for it before Cooper shot him in the foot), and Cooper doesn’t signal when he makes left turns — not when he pulls out of the Valero station, and not by the Double R. Even moreso than any of his other behavior, these careless driving habits tell me that our beloved rule-honoring boy scout Cooper is truly gone!

Random nice subtle touch: the two dogs running alongside Cooper and Carrie’s car out of focus in the first shot of them driving.

Does anyone know what the deal is with the symbol on the pillar by the Palmer door? I assume it’s just something from the actual location, but I’m still curious. (Sorry, this is a crappy photo taken from my TV screen.)

I agree that it looks very odd and could indeed by an orb-exit point. However, isn't it just residue from his head wound + a beer gut?
Top

Not sure if this has been mentioned before...

While Dale and Diane have the most awkward sex scene ever, "My Prayer" by the Platters starts to play. I believe this was Lynch's way of letting us know that it's the same year, maybe even the exact same night as when the song was heard in Part 8: 1956. This year matches the look of the car and motel we see that night.

It seems to me that Dale/Richard and Diane/Linda are forcing themselves to have sex, perhaps to change the course of history? Perhaps they knowingly traveled back to 1956 together to try to prevent the events of August 5th? I have no idea how or why their having sex would accomplish that, but it's a possibility worth considering.

For what it's worth, it is approximately 430 miles from Odessa to any number of desert areas in New Mexico.
Top

Still have no idea what it could mean.
Top

Still have no idea what it could mean.

Now this is cool
Top

Have the points in this Twitter thread been discussed?

I've seen Fallen Angel. Certainly Preminger's other film Angel Face was huge for the Evelyn Marsh story in Season 2 (which came almost entirely from Harley Peyton, I think). I think the stuff in this is a mix of intentional thematic resonance and happy coincidence. But then I also don't subscribe to the recent spate of dreamer theories, so.

Jerry Horne wrote:Have the points in this Twitter thread been discussed?

Neat. That opening shot outside of Pop's Diner is one of my favorite film noir images. In fact I've already got more than one version of it saved. That said, I hadn't noticed the parallel with Twin Peaks. I think that the diner name and the three-days-off waitress bit are the most likely things here to be intentional. I'm more iffy on the other details, but they're nevertheless interesting.
Top

What would have happened if Cooper had delivered Carrie Page to this house?

Just watched Season 1, Episode 2. What if Carrie Page is Laura's cousin? 25 years past, it seems obvious TMFAP is talking about Maddy Ferguson. However, since the dream takes place 25 years in the future... the obvious cousin would be Carrie Page.
Top
Post Reply
1401 posts