Season 4? Or is it over after this?

Pinky wrote: ↑Wed Jun 16, 2021 5:19 pm Lynch going more gonzo with a much smaller cast, budget and audience always felt like the natural progression to me. Filmed sporadically with anything that would have required a studio done at his own speed on his own property.

This is just going against logic, to me, with respect.

Why would Lynch go to Netflix if he was aiming for a smaller audience? If you can get a big audience anywhere it must be there.

For me at least, The Return was Lynch - FULL HEROIN LYNCH as David Nevins said. I don't know what form of Lynch would be stronger than that.

Overall, I would say The Return was as alienating and abstract as INLAND EMPIRE for instance.

So where is he going to go next? Film 8 hours of Sheryl Lee walking through his hallway out of focus with intermittent shots of lightbulbs?
Top

Wisteria is an Eraserhead sequel, confirmed.

Quoting this over to the new page just in case it got buried at the end of the last one. Not that I think it's all that meaningful for UN/W or anything but it's cool seeing Lynch and co. revisiting the Eraserhead stables. Pics look pretty recent too so seems like it's actually happening today, not something from a photo roll. Maybe part of a BTS doc or something? I would say maybe for a DVD release or something but the Criterion edition of Eraserhead came out not all that long ago and it's pretty well stocked with extras. Maybe somehow an IE extra for the long rumored Criterion version of that? Not sure what the connection would be but this is the kind of social media shit that actually gets me pumped. You can tell I'm clearly more of a Lynch fan than a TP fan.

re - the stables pic. I usually go by Lynch's weight to try and figure out if recent or not, but since just back of his head, hard to tell. He did some public speaking stuff at AFI in 2018, if I were to guess, I'd say that's when the pic is from. I don't know LA's policy on face masks right now, but It looks like he's not wearing any face mask, and he's kindof close to the person in front of him, so feels like pre pandemic to me.

The post itself seems to be in reply to someone called @ love_crime, who asked Sabrina when there would be another 'Do you have a question for David' video on you tube - on their instagram by way of tagging Sabrina, and her reply is the stable. My interpretation would be he plans to do a Q & A at AFI or do a you tube thing from the stable, I dunno.

I was confused about the love_crime call out too but it's actually a reference to the first stables post. There's 2 different IG posts, one is a set of 3 pictures captioned "I was going for a theme…but I don’t know if it’s working #davidlynch #eraserhead" and on that post the user love_crime commented "How amazing it would be to do a photo shoot a David Lynch in front of those doors and archways!" which prompted the second pic of Lynch actually in front of the doors at the stables in a follow-up post captioned "This is the best I can do right now @_love_crime_ "

The second one with Lynch in it seemed more recent to me because he seems noticeably thinner and the "right now" at the end of Sabrina's caption (as if she just took it) but it definitely could be older and another stroll down memory lane.
Top

ah i see it now, there's the overhead schematic and the photo of the archways, and love_crimes is asking about a photo shoot near the archways, and her reply is, here is a photo I found of him at the door with the archway. I think it's an old pic.
Top 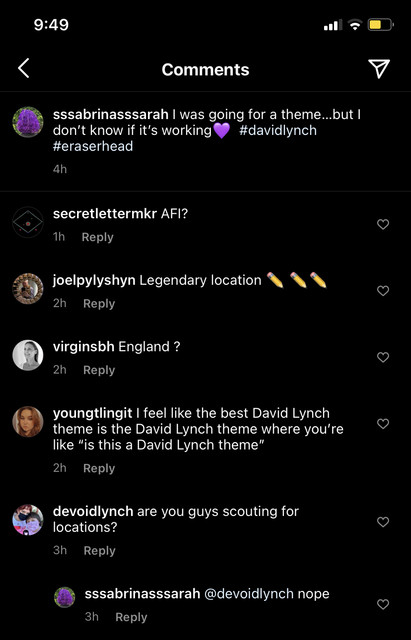 he also wearing that pink wrist band in the stables pic. I dont think he's worn that in awhile, I dont see it in the recent lottery number videos where you see his wrists. I have seen him wear a wrist watch though in the past year that has a more scarlet red band.
Top

Lynch was at AFI 's Greystone Mansion in 2019 for some 50th anniversary celebration. I think that's where the pic is from.

Wisteria is an Eraserhead sequel, confirmed.

Nice caption on that first one
Top

It may already have been scouted.
I have no idea where this will lead us, but I have a definite feeling it will be a place both wonderful and strange.
Top

It may already have been scouted.

Definitely have already done location scouting. And the question was in reference to the posted image, anyway.

The fact all direct questions are ignored apart from one where they're being asked if they're doing something that would have been done ages ago points to something.

As does the "trying for a theme" line.

Can't quite place my finger on what. But something.
Top

Lol yeah, I've spent close to a decade trying to get one particular project off the ground when I sometimes think I should have given up after a year, two or three tops, so I know about loooooooooong waiting games (long stretches of despair and despondency, punctuated by optimism to keep you going)!

But it did occur to me she could be answering literally. If locations have already been scouted or decided upon, they're not scouting now. It does look like an unusual place, of course it could be just somewhere they go to chill/explore, nothing to do with filming, but those doors and buildings do look unusual enough to feature in some footage.

As I said a few pages back now, I don't care if I'm wrong - I'm going to stick with the "something is happening" stance, for awhile anyway (with full permission to change my mind later lol, like if we go another 400 pages without news or something, but let's all hope that doesn't happen!).

Speaking of which, I asked a question on page 400 that might have gotten lost in the shuffle as we were discussing the board's policies. Is this now the longest thread on the forum? (Does anyone know how to search for long threads? I know the Profoundly Disappointed Support Group is rather long too, but that topped out at 375 pages when it went dormant in 2018 - and we've already gone quite a bit beyond that on this one.)

Edit - Nope, NON SPOILERS: Twin Peaks: Season 3 on Showtime Thread is 568 pages! It went dormant in 2017. Is THAT the longest one then? (The deleted spoiler thread may also have been very long too.)
I have no idea where this will lead us, but I have a definite feeling it will be a place both wonderful and strange.
Top

Jonah wrote: ↑Thu Jun 17, 2021 12:20 am It does look like an unusual place, of course it could be just somewhere they go to chill/explore, nothing to do with filming, but those doors and buildings do look unusual enough to feature in some footage.

As others have already noted, those are the stables at AFI where he shot Eraserhead in the 1970s. JackWithOneEye identified the photo as probably being from 2019. They’re just reminiscing about Eraserhead in these posts. We would
all do well to remember the aphorism Sigmund Freud never actually said: Sometimes a cigar is just a cigar.
My Twin Peaks timeline.
Top

"I was going for a theme. Don't know if it's working," to mark the pivot from #twinpeaks to #eraserhead

That's the cigar. That and answering an insta question so banal that the act of answering it is itself a tautology

of all the ones to pick in wanting to "respond" to baseless rumours unfairly picking at her "personal photoblog". It's that one.

Almost all of these pics have been archival ones and so are the ones at the stable.

I do hope they get to Mulholland Drive soon. I bet the other Lynch films won't get anywhere near the number of pics and stories The Return got.

@underthefan, do you know if Netflix ever commission non-union productions? Or would their three-year SAG AFTRA deal prevent that?
Top
Post Reply
7202 posts